Criminal justice reform is indeed among the significant social issues of our time. Under current laws and social norms, ex-offenders are labeled as convicted felons, which amounts to a life sentence of a negative image. No one comprehends the derogation of being ostracized from various aspects of life, which most people take for granted, more than formerly incarcerated persons.

Everyone in the above photo as experienced the negative impact of being labeled as a convicted felon and typecast as a lowlife. They are all devoted to criminal justice and reentry reform. While they are representatives and/or affiliates of various organizations, they share the same objectives.

Dr. Rita Ali (AKA Faridah) is the founder of the We 2 Matter Nonprofit 501c Corporation, from now on, referred to as (ME2M) and author of Triple Jeopardy. She knows only too well what it means to be the victim of an unjust conviction. Despite her innocence, she was wrongfully indicted, convicted, and sentenced three times on virtually the same charges. Standing on her convictions, and not bowing down to the federal government or pleading for mercy, by admitting to a crime, she did not commit subjected her and her children to vicious persecution. Serving time in prison exposed Dr. Ali to the devastating impact incarceration has on women. Removing them from their children and love ones adversely affects the family structure and communities at large. This prompted her to bring attention to the plight of women and seniors.

As a woman and senior citizen, Dr. Ali is fully aware that women have all the obstacles that men and younger ex-offenders returning to society have. However, there are difficulties that women have, which men do not undergo while imprisoned. A prime example is stress of being pregnant, giving birth, being abandoned by significant others while they’re serving time. Far too many women are in this situation because of their involvement with the man. Seniors have the added burden of physical ailments that prevent them from getting hired by the limited number of companies that will employ convicted felons.

Consequently, they are unable to work in positions requiring them to stand on their feet all day or do the heavy lifting. Many of these elderly folks have no family support and end up homeless. WE2Ms primary focus is to provide additional services for these two segments of the population.

Considering the fact that women are the hub of family life when given the opportunity to prosper, everyone benefits. They are mothers, nurturers, and caregivers for the elderly. When we help stabilize formerly incarcerated women, we help their children, parents, spouses, and males in general. WE2M’s mission has undoubtedly been advanced through the support of other organizations like Concreates and standing United.
While incarcerated, Vincent Bragg recognized the potential of his fellow inmates. He observed their ability to create something out of nothing such as – books, music, entire meals – within the confines of concrete walls. As founder/CEO of Concreates, his creative advertising agency is powered by current and formerly incarcerated individuals. Even more remarkable, Vincent has achieved this while still on federal supervised release. As a result of his successful operation, he receives requests to speak at forums of Criminal justice reform and duplicate his Concreates prototype globally. Tommy Kurts and Toni Welch are members of the Board of Directors. They are dedicated advocates of criminal justice reform and have worked tirelessly to empower convicted felons and reentering citizens with employment and other means of support. WE2M is appreciative of the assistance Concreates has and continues to offer. Sharing their experiences, knowledge, and skills have accelerated our efforts to operate at full capacity.

Danny Lansdale and Tyler Hauser are cofounders of Standing United. With their administrative assistant Edee Phillips and others, they have helped hundreds of formerly incarcerated individuals to transition into society. Through years of hard work, they have established relationships with judges, wardens, members of law enforcement’s politicians, corporate leadership, and charitable foundations. Their collaborative efforts have earned them the confidence and trust of elected officials and associates of the judicial system. Standing United’s representatives are making substantial accomplishments getting nonviolent offenders released from prison early, into their care.

Danny and Tyler spent countless hours every day, picking up individuals from prison, placing them in safe housing situations, as well as getting them employment. Many recipients of their services offered by Standing United were in prison because of crimes committed while they were under the influence of some sort of drug addiction. Standing United has partnerships with drug rehab facilities throughout the state of California. As reformed addicts, Danny and Tyler have overcome their addictions and now live productive lives. They understand the struggles of those suffering from substance abuse. Literally, they are saving lives and guiding people on a path of productivity. Jennifer McClain, Amanda Reilly, and Felicia Lieberman are all formerly incarcerated women who are productive members of their communities. They are proof that given adequate resources makes a difference in how ex-offenders reduce the rate of recidivism when they are given a chance to regain a dignified position in society. These remarkable women are not satisfied to simply live a life of stability. Knowing and experiencing the walls of incarceration, and the difficulties of being made whole again, once they have served their time, they are compelled to help others struggling in similar situations. 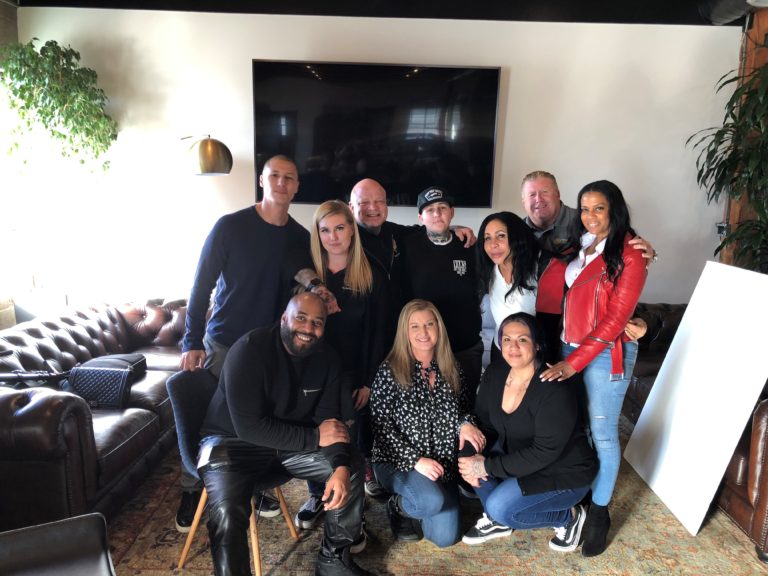